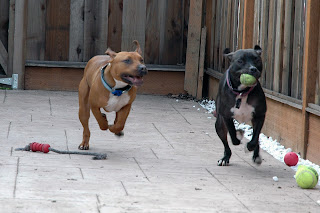 When we're out walking, most people call our dogs pit bulls. I don't mind them being called pit bulls, however, I no longer find this an accurate description. To me, the two dogs above are very different, in both appearance and temperament. Abbey (the black dog on the right) is tall and leggy (confident yet very excitable) and Jake (the dog on the left) is shorter and has a more stocky build (he's also very shy of strangers).

Earlier this year, we performed DNA testing on our two dogs. When Jake's DNA results came back we were pretty excited and were pleased that we got at least one of his breeds right - American Staffordshire Terrier. His second breed is American Bulldog.


When Abbey's DNA results arrived, you could say we were a little surprised. We thought she was a American Pit Bull Terrier mix. So when we looked at her DNA, we couldn't believe our eyes! I could believe she had some Doberman Pinscher in her as she has long legs, sleek body and long nose. But I failed to see Cocker Spaniel in her at all.


It is said that only a small percentage, about 5 or 10% accounts for their look. You could chose to believe the DNA result or not. But Abbey's DNA results show that it's extremely difficult to guess the breed based on looks alone. I looked at Abbey's DNA and thought to myself, eight breeds! What kind of the dog are you? Are you a Doberman or Cocker Spaniel? In the end I came back to the same conclusion as before, she's a good dog.

Even though I have a rough idea of the breeds that make up Jake and Abbey, I'm still aware that in public they'll be judged simply by their looks and not whether their a good dog or bad dog. So whenever we're out in public we always make sure our dogs are well behaved in public.

Looking at them both, I can only see the terrier side. I didn't know that dogs can also undergo DNA tests.

Yes, there's a dog DNA test. There are many companies that provide this service. We chose Wisdom Panel (http://www.wisdompanel.com/ ) on our friends' recommendation. We like the convenience of their kit, you swab the dogs cheek and send it back to them. We had to wait three or four weeks for the results.

Interesting, thanks for the link to this! Your dogs looks so similar to me and yet one is much more mixed than the other. You're right, looks are just looks and what the dogs is on the inside is a whole different story. I love my shelter mutts too:)

Any your little guy is SO cute. Seems that shelters always label their dogs as either Pit Bull or Chi:/