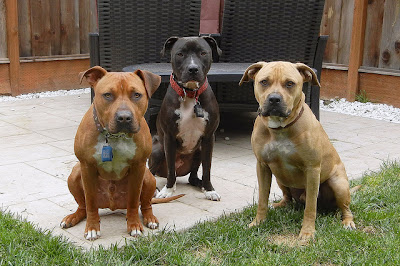 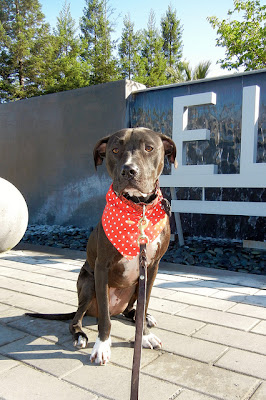 I mean they want to pet your dog(s), yet aren't prepared to wait to hear or obey the ground rules that you set for them. It’s as though they want their (quick) fix and then move on. It can take Jake five minutes before he’s comfortable with someone. We find very few people who are prepared to wait five minutes before they get their dog fix. So they either rush the greeting, in which case Jake could back into road, or simple walk away.
We're interested in hearing feedback on other peoples experiences...
Posted by Nigel Stolting at 4:30 PM

I can very much relate to this. I want a vest for Violet that says, "Do not approach. In training." Violet is the rare case where I allow jumping up on strangers. I don't allow it with my other dogs. Just as you said, the training is modified to fit the needs of the dogs. Since Violet has demonstrated fear aggression toward people, any time she offers a happy-dog greeting to a stranger, I tell her how wonderful she is, even if that means she put her paws up on them. Eventually, when she starts approaching every stranger with wagging tale and enthusiasm, I'll correct the jumping, but for now, I'm trying to help her develop the constant positive and happy mindset.

As for strangers approaching and trying to pet without asking, it's a huge concern of mine. Like Abbey, Anubis is the party-boy. He once broke the nose of a very sweet woman who leaned over him just as he was jumping up. I won't make him sit because that's just too darn awkward for a greyhound, but I do ask that people wait to approach until he is calm. With Violet, it's very important that people allow her to approach them. If they do that, then she will most likely adore them, but if they invade her comfort zone before giving her a chance to check them out, she gives a warning bark, and I assume it could lead to a dangerous situation of not heeded.

All this to say, YES. If people would just ask before petting and approaching the dogs, everyone will have a better and safer experience. :-)

Guinness behaves like Jake and Violet combined when meeting strangers. He would back away first then if the stranger ignored his signal and continue to approach to pet him, he would let out a warning bark. But if the person gave him time and some space, he would warm up and eventually end up doing the "drillies", which is his way to show affection for the person by first resting his head on the person and then begin "drilling" with his long snout into the person (funny he needs personal space but doesn't give others any).

Chilly is more aloof with strangers, she's fine with people trying to pet her, but unless that person has treats for her, she doesn't care much for the petting.

So we definitely appreciate people who take the time to learn about our dogs when meeting them. But if they don't, Guinness usually is the first to tell them off.

Two Pitties in the City said...

Abbey sounds just like our Miss M! I have a problem where I'm walking the two of them together and they look really nice and calm so people think it's ok to pet them. Then, Miss M freaks out because it's so exciting that someone pets her, and she will turn and try to play with Mr. B and they stand up like bears and it looks like they're fighting. When I'm with the 2 of them together, I just try to avoid people. But E did make a good point, is it better that people do want to try and get to know our pitbulls rather than walking away and thinking poorly about them? It's just trying to find a good balance between training the people about how to act. I do like your 'drug fix' comparison.

Appreciate you blogging this