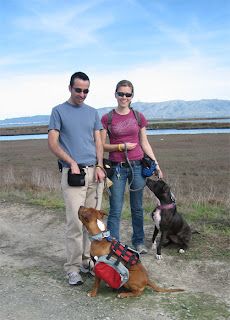 Even though we've been training our dogs for a while and they're well behaved. We've always made sure that when we took the dogs for walk we had one person per dog, so they had our full attention and we were able to train them well.


I still remember the first time we took Abbey and Jake for a walk. We didn't even make it a block from our house. The only thing that the dogs were interested in was playing with each, and dragged us all over the place. It was so embarrassing, we made a quick return home, thinking this is going to be a hard work.


Eight months later, both dogs are able to walk civilized next to each other in the public without causing a scene. We're still polishing some areas of obedience training with them, but they're improving all the time.


The other day, when it came to take our daily walk, I didn't want to go out twice. I was going '"Eeny, meeny, miny, moe..." which dog shell I take out first. Both dogs looked excited and eager to go outside. On the spore of the moment I decided to take them both, I put a Halti collar on each of them, connected two leashes together, put the backpack with water on Jake and stepped outside of our house... 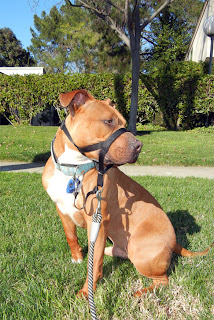 Than it hit me "Am I crazy! They're going to take me for a walk and you'll look like a crazy lady flying behind them..." I tried to calm myself down "Don't let them to smell your fear!! Keep it under control and it will be fine".


To start with, I took them for a short walk around the block to see what they would be like together. I quickly realized that they couldn't walk side by side. Jake was using Abbey to rub his nose on her body in attempt to remove the Halti or bumping into her with his backpack (he doesn't realize that he's wider with it). So I switched and had one dog on each side of me.


My favorite moment was when they did a synchronized 'crocodile death roll' on the grass, to show me there displeasure about the Halti collar. I thought, okay have your tantrum now and see if you want to move forward or not. Once they got it out of their system they walked by my side and listened to me.

For our fist walk together, I chose a quiet part of our neighborhood and covered about three miles. Jake was happy to have Abbey by his side, it gave him the confidence to pass people who would normally intimidate him. The traffic noise on the busy street didn't seem to bother him either. If you saw him, he could have passed for a confident pit bull, walking with his back pack and looking proud. Abbey was my star pupil and looked for my direction. I was very proud of them and for me for taking this step and walking them together on my own. 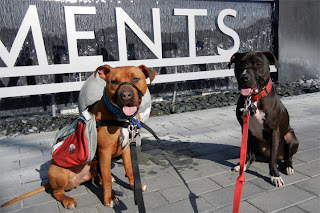 If only Abbey knew how much extra attention Jake was getting for wearing his backpack. People kept commenting on how nice looking the dogs are and they especially loved Jake's backpack. Poor Abbey was getting overlooked. She loves to meet new people but refuses to be used for carrying the water on her back. Last time I put the backpack on Abbey she sulked and scowled for four miles and looked so very pitiful.


I do realize that using a Halti is not the best way for the long term. It doesn't teach a dog to walk loose leash or the etiquette of walking in the public. It's just temporary quick fix, until I'm sure that they'll not take me for a ride.