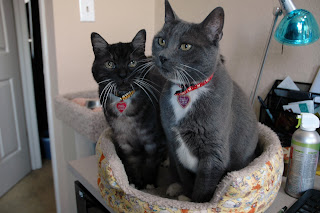 In addition to our two dogs (Jake and Abbey), we live with two cats Bailey (smoky black) and Percilla (grey & white). We live in a townhouse so we're able to divide  the house in two by using a baby gate at the bottom of the stairs. Upstairs is for the cats and downstairs is for the dogs. We didn't want to put our cats through the stress of living with the dogs, we also wanted to keep them safe when we weren't in the house. Cats are very finicky creatures, they don't like change and they love to lounge around the house in peace. We also had to take into consideration that Bailey and Percilla are strictly indoor cats and have never seen dogs in their life. Both cats are seniors, Bailey is almost twenty while Percilla is (around) twelve.

Percilla is a scaredy cat and she won't come close to the dogs. She will stand on top of the staircase and yell at us when she's hungry and wants to be fed. The dogs sit at the bottom of the staircase and watch her. Bailey is a stubborn, needy cat, whose not afraid of anything. So when he's in need of attention he will come and find us wherever we are in the house. Even if it means going downstairs between the dogs.

It was easier to train Abbey (when she was the only dog) to leave Bailey alone. Even then she was eager to meet Bailey 'up close and personal'. Bailey did't want to do anything with Abbey, and didn't appreciate her being so close to him, he would hiss and swat at her. Abbey never laid a paw on Bailey, and simple followed him around. From time to time, Abbey will give Bailey play bows to invite him to play, but in cat language a play bow will mean (something like) 'I'm going to attack you!'


When we adopted Jake, we gave up completely with integrating the cats with the dogs. Jake has a strong prey drive, and wasn't used to living inside the house, he also had limited training. We also had to retrain Abbey around Jake, otherwise so she would goof around with Jake and wouldn't listen to us.

It would be also nice if Bailey would give us some warning when he's coming downstairs instead of popping in unannounced. He comes downstairs whenever he pleases and demands our attention. Bailey will prance around the dogs, like they aren't there and isn't fazed by them at all. Jake and Abbey probably see Bailey as a squeaky toy when he meows and is fun to chase.

Yesterday when Bailey came downstairs, we had both dogs in a sit position and waiting. We were asking them to 'leave' Bailey and keep checking in with us. After couple of minutes Abbey just laid down and gave up all the hope of getting close to Bailey. Jake just stood there whining from time to time, but still sitting in one place. Bailey was a big tease, walking between the dogs, chirping and meowing like it was no big deal. I swear he is either fearless or clueless.

Some days I wonder if we were too overprotective of the cats, if we didn't separate them, they might be used to each other by now. But on the other hand, I worry that the cats are barely ten pounds (in weight)  and that the dogs are fifty something pounds and have quite a strong prey drive.

I wonder if the dogs will ever leave Bailey alone or will keep trying to meet him.
Posted by Alley903 at 9:44 AM