Running with my dogs....

I'm starting to think that Jake could be a great running buddy. He loves to run and it seems to give him a boost of confidence. When he runs, he actually look like a proud confident pit bull, holding his head high and tail wagging. 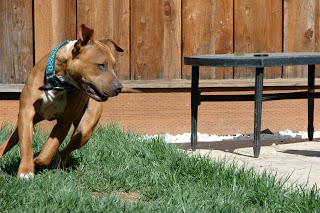 Initially when we adopted Abbey, I thought that she could be my running buddy. I started training with her when she was around eight moths old. We would run short distances on our walks, but Abbey was overly confident and goofy. It was like she was mocking me! She would run to the end of the leash, and then turn around and run back to me; she would then jump at me (occasionally mouthing my hands). It was a was a fun game for her, and one that I didn't enjoy. I stopped running with Abbey while I waited for her to mature and for me to improve my handling of her. Later on we found out that Abbey has bad knees (luxating patella in both back knees). So the idea of Abbey being my running buddy never really took off.
I don't understand how can Abbey carry around that much muscle and isn't able to support herself on those thin spindly legs. Abbey weighs roughly the same as Jake, but her legs are much thinner and bowed at the back. 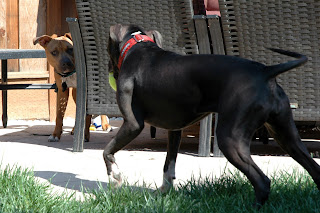 What I like about Jake, is that he's a nice calm boy and can run at your pace. He seems to be well proportioned and has stronger legs than Abbey. I was thinking about starting interval running with him in the spring time and see how he does from there. It's been a while since I was running and I would have to ease myself into it, it would be nice and easy for Jake too.

I guess my personal battle is that I don't want to injure either of our dogs. I'm worried about wearing out their joints prematurely and cause them problems later in their life. On the other hand, I'm hoping that because we feed them a good diet, with additional joint supplements that Jake could enjoy going on short runs. Who knows, he may not want to run as he likes to stop and sniff every corner, he may prefer being a couch potato.


Either way it will be his choice... 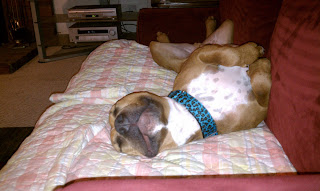 Do you run with your dogs and do they enjoy it?

Labels: dog as a running buddy