Checking out the competition

It's been a while since we've taken the dogs out hiking, so on Sunday off we went for a nice long hike around The Palo Alto Baylands. It must have been a good hike as both dogs were still  tired the next day. Rather then take them out walking, I was looking for an activity around the house to keep them occupied. Poor cats draw the short straw! I decided desensitizing the dogs to the cats would be a useful activity. Both dogs get excited when they come face to face with the cats.


We're fortunate to live in a town house and are therefore able to split the two levels. The cats live upstairs, while the dogs live downstairs. The cats can only come to the bottom of the st airs before they hit a baby gate. The only real time either cat bothers to come downstairs is to remind us that they exist and that need feeding from time to time. Due to these living arrangements Bailey, Percilla, Jake and Abbey rarely see other and haven't ever spent any amount of time in the same room.


My plan was simple, take the dogs upstairs and let them hang out in the office with the cats, of course I would be acting as hall monitor to stop any unwanted behavior. Due to the size of our office and the difficultly in training/managing Jake and Abbey side by side, I restricted myself to taking one dog at a time to meet Bailey and Percilla. Equipped with lots of treats, a spray bottle full of water and a leash off I went...


Both dogs loved the adventure of discovering uncharted territory and visiting our other little squeaky creatures. The cats didn't appreciate the surprise visitors!
The visit to the office went more or less as I had imagined. I gave Abbey firm instructions not to mess with the cats. So, she sat there whining and looking pathetic. I was worried that she would trip over her bottom lip she was sulking so much. All Abbey wanted to do was to play with the cats.


Bailey was acting as he normally does, absolutely fearless and was doing his best to tease Abbey. While Abbey was doing her best to stay calm Bailey decided to go for a stroll around the office. When Abbey gets excited her head starts to bob around like a little 'bobble head' toy. As Bailey strolled around the office Abbey's head starting to 'bobble' in excitement and the volume of her whining increased ten fold. Abbey was hopping that she would be given an opportunity to play with Bailey. 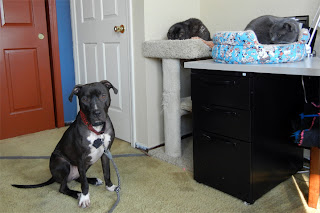 Jake had been lucky boy and had already visited the cats on two previous occasions, and so he already knew the drill. Jake was a perfect boy and was nice and calm when he entered the office. On his third visit to the office he was more interested in my treat pouch than the cats. From time to time he would check out the cats and see if they were any friendlier. I'm sure Jake is a little disappointed as neither of the cats wanted to play with him or let him sniff them. Percilla being the grouchy girl she is, had a bit of hissy fit and swatted and anyone who came close to her (including me!). Percilla looked more than a little worried that her space had been invaded and would do whatever it took to win back the advantage. Jake seemed to take Percilla's correction (a swipe across his nose) well as he backed away and hid behind me. 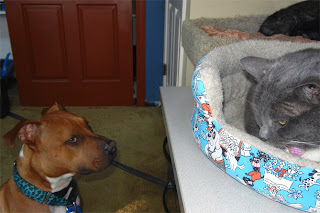 I had to laugh as I thought taking the dogs would upstairs would be a nightmare. Rather than trying constantly to interact with the cats, both dogs were far more interested in checking out the office space as a possible summer (or winter) retreat. I'm sure they saw it as an upgrade to the current living arrangements.


Both of the dogs were impressed with the views from the office. They could see the whole street and the people passing by. Abbey had the idea to see if she could scramble up the cat tree for the better view (you can see the cat tree in the photo with Jake, on his left side). I would have loved to have a photo of 55lbs pit bull siting on top of the cat tree! Although I'm not sure it could take her weight. I am curious what the people passing by would think if they knew they were being spied on by two pit bulls :-)


I think both of dogs would be great at The Neighborhood Watch Program. Abbey is good at alerting me that somebody is behind our door or when she thinks that somebody is too close to our house. We also have a squirrel highway running outside our house, squirrels run up and down on the power lines that run along our house (just don't tell that Abbey, as she hasn't discovered this yet!) 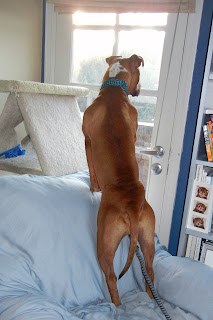 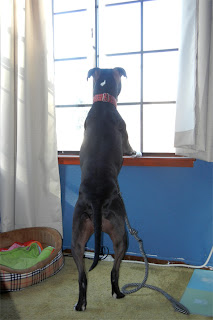 Despite the small size of the room, they tried their best to fit in and tested all the creature comforts that were available to them. They both loved how sunny and warm the room felt.

Both dogs discovered the Drinkwell Pet Fountain and emptied it between them. They kept coming back for more water, I think they liked the running water. 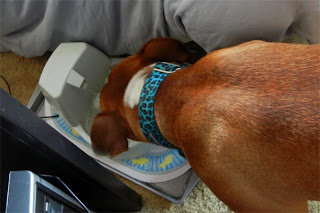 Percilla kept a close eye on the dogs and made sure they didn't cross the line, Bailey took a nap, the excitement was too much for him. 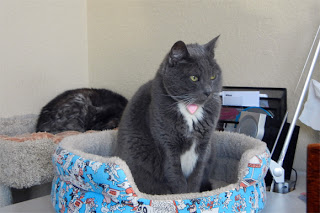 Both dogs thought that the cats were a bit stuck up for not playing with them and found them very boring. As you can see from these photos the dogs made themselves at home and would love to come back soon again. 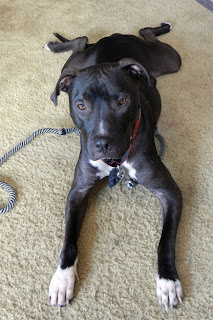 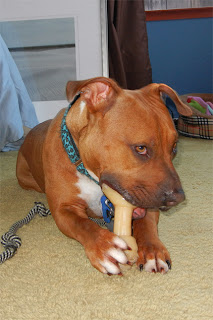 The visit went better than I thought, after a short time everyone was able to relax in the same room. The best thing is that the dogs know the 'leave it' and 'wait' commands. So I didn't have to hold onto the dogs' leashes for very long as they were both well behaved.


I wasn't able to do this with Abbey when she was a puppy, she used to run around barking in excitement whenever she saw the cats. I think if we keep on introducing the four of them together (slowly) then maybe they could eventually learn to coexist.


Do you have cats and dogs living peacefully together?
Did you find it easy or not to integrate these two species together?