Jake is our big softie. He's almost two years old, he looks like big powerful dog. Yet every time, taking him for walk is an adventure... sometime good, sometimes scary. We don't know much about his past, except that he was a stray in Hayward. We adopted him about five months ago and we're slowly rehabilitating him with the help of our other dog Abbey. 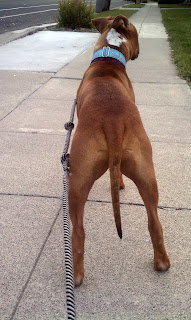 I keep trying to teach him loose leash walking, yet I have to find a technique that will work with him. I tried "red light" (stop when he's pulling), put him in sit and ask for the look and than "green light" go. Usually go for Jake means full speed ahead and catch up what he missed by sitting down.
I tried teaching him the command "back". When he pulls, I jolly him back and give him a cookie - over a time you say back and he should drop back on his walk as you go along. Command "back" worked like a charm with Abbey, the only downside was that Abbey worked out what was the trigger and trained me to feed her cookies. Yet Jake can't grasp the meaning of the word "back".
I tried changing directions when he was pulling, so he would have to focus more on me. It almost worked except that time to time Jake would sit and refuse to move. Almost like he was waiting for me to make up my mind where I want to go.
The first half mile consists of a lot of pulling until he gets his ya-yas out and then he'll drop back. Except when he sees a squirrels, than his prey drive kicks in and he takes off like a rocket. I guess they don't call them terrier's for nothing (Staffordshire Terrier).
Everyday is a victory when Jake doesn't panic and learns that the world is not such a big scary place. 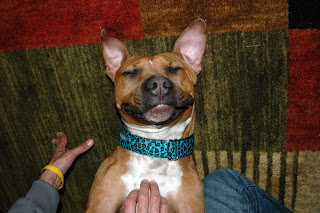 He is qutie the Stud Muffin! My little girl is a Pit Bull/Red Heeler mix and I know what you mean for the firt mile of our walk she pulls and pulls and is a bit hifee (hyper and feisty) but then she settles down a bit and I just have to give her those reminders to focus. Sounds like he's making some progress though ;o) its a labor of love

I know exactly what you mean! We have a 17 month old pittie (mix?) rescue that for the first 6 months we had him was a nightmare on walks. Would either bolt into the street at the slightest noise or would sit down and refuse to walk at all. But it DOES get better! Now that he's more confident (only took 6 months of constant walks and treating) he can walk down the street like a normal dog and is even able to focus on commands when we walk! Good luck!